The Bureau of Justice Statistics revealed an alarming increase in the number of Americans imprisoned in our country. Frontline demonstrated this in the graph below. These statistics should not strike fear into the hearts of violent criminals. This trend is a threat to all of us. 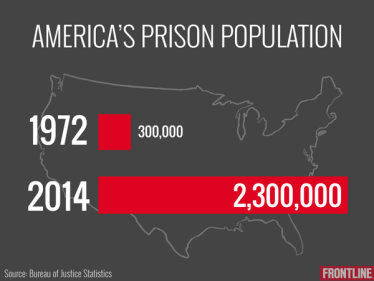 Our prisons have become a for-profit industry. This is something that has devastated millions of lives and must be stopped. Laws have become so overbearing that many statistics have concluded the average working american unknowingly commits 3 felonies a day on average. This is discussed in L. Gordon Crovitz’s article in the Wall Street Journal and in Harvey Silverglate’s book Three Felonies A Day: How the Feds Target the Innocent.

I would like to leave you with this eerie warning from Ayn Rand, in 2015, this hits us right at home:

“We’re after power and we mean it… There’s no way to rule innocent men. The only power any government has is the power to crack down on criminals. Well, when there aren’t enough criminals one makes them. One declares so many things to be a crime that it becomes impossible for men to live without breaking laws. Who wants a nation of law-abiding citizens? What’s there in that for anyone? But just pass the kind of laws that can neither be observed nor enforced or objectively interpreted – and you create a nation of law-breakers – and then you cash in on guilt. Now that’s the system, Mr. Reardon, that’s the game, and once you understand it, you’ll be much easier to deal with.”
― Ayn Rand, Atlas Shrugged

2 thoughts on “How to Create a Nation of Criminals”

What I Write About